PROFILE--John Barbour has been running for 50 years 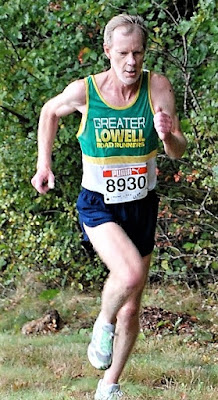 (9-18) John Barbour had some good fortune early. He grew up near Stanford University, and his father took him to many wonderful running events there. For example, did you see Gerry Lindgren and Steve Prefontaine race each other in a college cross-country meet? Probably not. But Barbour did, calling it, "the greatest mano-a-mano race I'll ever see."

Childhood: I was born in April 1954, and grew up in Menlo Park, California, now known as the home of Facebook though to me it’s the place that gave us Jerry Garcia, Stevie Nicks, Lindsey Buckingham, & the Kingston Trio.  My dad was a lifelong track fan and long/triple jump official.  I often went to meets with him, which exposed me to world-class performances.

Started running/years running?  March, 1968.  I was six when I talked my dad into letting me
run a mile at Angell Field at Stanford, after a few occasions of running around the block at home.  I did these for time and can still feel the rush of running past neighbors’ houses. This went on for a few years though I didn’t begin to run regularly until 8th grade.  I still have the notebook marking the date of my first ‘official’ run, three miles on March 11, 1968.

Why did you start running?  My dad and I often went to meets at Stanford – unlike football games, you could get close to the action, which was thrilling.  Attending the legendary 1962 US-USSR meet there -- Wilma Rudolph’s last meet, world records by Valery Brumel (high jump) and Hal Connolly (hammer throw) -- sealed the deal; I was hooked.  In a few years it became evident that distance running was my only real athletic option – I began high school at less than 80 lbs and could barely break 8 seconds for 50 yards . . . good thing I already loved it.  I guess it paid off as I eventually made the Olympic Marathon Trials twice.

Did you have an early inspiration or person who motivated you?
• Early on, Peter Snell & Jim Ryun; today I’d cite Emil Zatopek
and Doris Brown Heritage.
• In 1961 Arthur Lydiard brought his great New Zealanders to Stanford for a tune-up en route to the Commonwealth (nee “Empire”) Games.  Olympic 5000m champion Murray Halberg accidentally stepped on my foot while talking with friends after his race.  “Oh excuse me lad,” he said; I thought, “I’ll never wash that foot again.”  Even at age 7 I knew what “Olympic champion” meant.
• Getting autographs of Billy Mills, George Young, Gerry Lindgren (all on one program), and Ron Clarke (who wrote “Good luck, John”), at indoor meets at the Cow Palace in San Francisco.
• Also (1) the 1969 Pac-8 XC at Stanford, with WSU senior Lindgren and Oregon frosh Steve Prefontaine hammering at each other for six miles, by far the greatest mano-a-mano race I’ll ever see; and (2) being in Munich’s Olympic Stadium in Sept. 1972 for Pre’s 5000m final and the start/finish of Frank Shorter’s gold-medal marathon.

How much did you run per week in your peak years? Now?  The longest week I can find in my running diaries is 123 from 1991.  In peak marathon training I’d aim to average 100 miles/week for 8-10 weeks leading up to taper. Now (when healthy) I’m delighted to be in the 35-50 range for 5-6 days/week though I go more by time than distance. 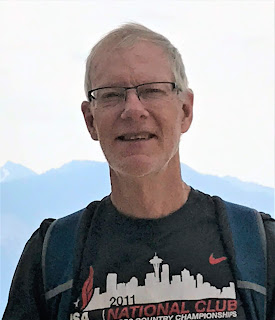 How do you train now? Do you attend coached workouts?  Local coached workouts conflict with my own club coaching, but I’ll do some up-tempo laps with the Liberty AC women.  There’s a demanding treadmill workout that I love to do in fall/winter.  (To me the treadmill is a challenging friend.)  Other than that, I just head out the door and aim for 40-60 minutes (occasionally up to 1:30 on weekends, parts willing), off-road for at least a portion of most runs, at whatever pace feels good, grateful to be able to do it.

Has your diet changed through the years? Dad worked for General Mills so Wheaties and Cheerios were omnipresent when I was a kid.  Mom, born in Kentucky, sure knew how to fry chicken but, as a child of the Depression who grew up in the Sacramento Valley, also drew beautifully on Mexican, Chinese, and other influences. Now, much less red meat than growing up, chicken, beans, brown rice & whole grains; greens.  Cheese is fine.  Not many sweets.  “Vices” include good coffee, wine, and craft beer.

Cross Training:  After getting smacked by a red-light running driver in late 1987, I became a believer in deep-water (pool) running and it remains my go-to when working through injuries.  Will also do elliptical or cycle as necessary, and I’m a huge fan of XC skiing though I don’t do nearly as much as I’d like.

How important is social running to you? If you were/are a competitive runner, can you adapt to the slower times and enjoy a social run?  Most of my life I’ve trained solo but have always loved group running and the sport’s social element.  Now, when I run with a group I don’t care about pace; I just enjoy the group.  Runners are almost without exception great people, and being able to spend time running with them is one of life’s great gifts, whether you’re working hard or going easy.

Obstacles along the way:  (1) Getting hit by a red-light-running driver a week after qualifying for the 1988 Marathon Trials (resulting in a Trials DNF).  (2) Mononucleosis two weeks before a Trials-qualifier attempt in 12/91 (best shape of my life).  (3) Age-related injuries (mainly Achilles and piriformis, also psoas) since 1999 that have put me, at times, on the shelf for long stretches.  But I learned from them and have always (so far) managed to bounce back.

Favorite quotes:
1) From Zen and the Art of Motorcycle Maintenance: “You climb the mountain in an equilibrium between restlessness and exhaustion.  Then when you’re no longer thinking ahead, each footstep isn’t just a means to an end but a unique event in itself.  This leaf has jagged edges.  This rock looks loose.  From this place the snow is less visible, even though closer.  These are things we should notice anyway.  To live only for some future goal is shallow.  It’s the sides of the mountain that sustain life, not the top.  Here’s where things grow.  But of course, without the top you can’t have any sides.  It’s the top that defines the sides.  So on we go.”
2) From the film, “A League of Their Own. “It’s supposed to be hard.  If it wasn’t hard, everyone would want to do it.  The hard is what makes it great.”

Running-training philosophy: I’m ‘semi-structured’ now.  At this stage of life I am grateful for what I’ve been able to do and for being able to do it still.  My approach is, essentially, “go run today,” whatever form that may take.  My dad lost partial use of a leg, and thus the ability to run, at the Battle of the Bulge.  So my philosophy, I suppose, is one of gratitude for having reached this point in life having run long and reasonably well, and still to have a pair of healthy legs to carry me out the door each day.

What are the biggest lessons you have learned from running?   I am not by nature confident. There were races when I’d see long-legged greyhounds at the start and think “Why am I even here?” And then I’d find that I could run with them.  So the lesson is, you far are stronger of mind and body than you think. Also, fellow runners make one another better, whether friends on an easy run or race competitors. And lesson number 3, there is no feeling quite so exquisite as that which comes from a run or race where everything seems to come together right.

How has running helped you with the aging process?  I still feel like a kid, even if the mirror attests otherwise.  I don’t know what the future holds but running and being around runners of all ages adds, and has added, an immense richness to the experience of living.  If I should disappear tomorrow, I owe life no complaints. I’m blessed to coach the Liberty Athletic Club and write occasional pieces for New England Runner and others.

Closing comments: This is an excerpt from a piece I wrote in New England Runner in 2016:  Coming off the last turn at the 2016 Mayor’s Cup cross country race in Franklin Park, a runner zipped past on my left.  He was clearly much younger and I waited for him to blow my doors off down the final 150 meters.  Instead he said, “Go with me!”  So I did, and instead of a hard run-in I suddenly found myself in full-tilt, all-out sprint mode, intent on keeping his singlet within my reach.  About 20 meters from the line the legs began to wobble, but momentum carried my frame over the line just after his.

“I hope I’m running like that when I’m your age,” he said at the finish.  I tried to respond in kind and wondered just how old I looked.   So to you, my anonymous runner whose years could fit almost three times into mine, your act of sportsmanship was restorative.  This is what our sport is about, what makes it special.  Competition + humanity = sportsmanship and no, they are not oil and water.